gathering of the vibes

Watch 10 official videos from the 2012 Gathering of the Vibes festival featuring the likes of Keller Williams, Kung Fu, DSO, Conspirator and Lettuce. 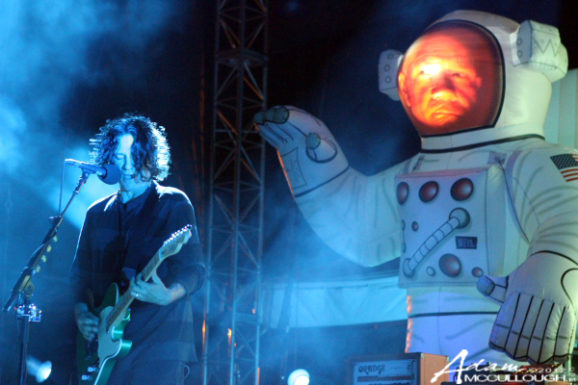 Gathering of the Vibes 2012

Thoughts and photos from the 2012 Gathering Of The Vibes festival.

Gathering of the Vibes founder Ken Hays talks to us about the festival’s past, present and future.

The initial lineup for the 2012 edition of Gathering of the Vibes has been announced.

Picture Show: Gathering of the Vibes 2011

Gathering of the Vibes at Seaside Park, Bridgeport, CT – July 21-24

Outside of a few questions that aren’t suitable for print, “So how many have you been to?” is probably the most asked question around Gathering of the Vibes. Sixteen years after its humble beginnings as Deadhead Heaven – A Gathering of the Tribe on the campus of SUNY Purchase, Vibes has become one of the Northeast’s largest annual festivals and one of the oldest as well. In a year when many “newer” festivals celebrate their tenth anniversary, GOTV is well into is second decade. Each summer, friends – many of whom only see each other for four days each July – meet up at Seaside Park in Bridgeport, CT to spend a weekend together. With the heat at record highs over the weekend (103°F on Friday) more than ever it was the people, both Vibes veterans and newcomers, who made this year’s event memorable.

Sticking to its roots as a celebration of the Grateful Dead, five different members of the band played at some point during the weekend. Dark Star Orchestra brought Donna Jean Godchaux to the stage on Thursday, Bob Weir and Phil Lesh’s Furthur headlined on Friday, while Mickey Hart and Bill Kreutzmann’s Rhythm Devils held court on Sunday. While many other festivals have recently been adding more electronic and popular acts – sometimes to the dismay of their core audience – Gathering of the Vibes has always stayed true to its roots. If the crowd on the field for Furthur was any indication, it seems that GOTV knows their audience as trying to snake your way out of the concert field was all but impossible with a patchwork of singing, swaying fans.

READ ON for more on Gathering of the Vibes 2011…

The initial lineup announcement for Gathering of the Vibes 2011 has been released and features a number of Dead-related acts as well as a few surprises. Both Furthur and the

It was originally “Deadhead Haven: A Gathering of the Tribe,” & people came. And they kept coming. And 15 years on, the Tribe’s still coming for Gathering of the Vibes, which has long since achieved veteran festival status & amazingly, manages to stuff its lineup that much tighter every year without sacrificing any of the comfort & just plain old manageability that makes it the choice festival for many concergoers over bigger, glitzier events.

Longtime promoter, Terrapin Presents president and avowed Deadhead Ken Hays knows this, of course. And it’s top of mind again this year, just as it has been for each of the Vibes’ previous 14 installments. Furthur will be there. So will Jimmy Cliff, Nas and Damian Marley, and the latest incarnation of Rhythm Devils, plus a glut of other top-flight acts on two stages.

Hidden Track caught up with the unflappable – and relentlessly busy — Hays this week, as Gathering of the Vibes 2010 prepares to get underway Thursday afternoon at Seaside Park in Bridgeport, Conn.

HIDDEN TRACK: Kind of amazing we’re going to celebrate the 15th anniversary of Gathering of the Vibes. Is it safe to say you didn’t imagine this kind of longevity at the outset?

KEN HAYS: No, I mean it all started in such an organic way. I’d seen over 300 Dead shows and knew people everywhere, but when Jerry died, both me and a lot of my friends knew we weren’t going to be able to see each other – we’d have to all go our separate ways after that. So, a bunch of my friends and I got together and said we’d have a party to celebrate Jerry’s life and the music of the Dead, and on Memorial Day Weekend in 1996, we went to SUNY Purchase college and produced what we called “Deadhead Haven: A Gathering of the Tribe” for 3,500 people. From there it grew exponentially. But it was totally out of default. We had no idea what we were doing. We just wanted to throw a party.

READ ON for more of Chad’s chat with Ken Hays…

GOTV ’10 = Weekend of the Living Dead

Back in May ’96, before Phish’s Clifford Ball – which is often credited as a pre-cursor to the current festival explosion, Deadhead Heaven brought a variety of Dead-inspired bands from